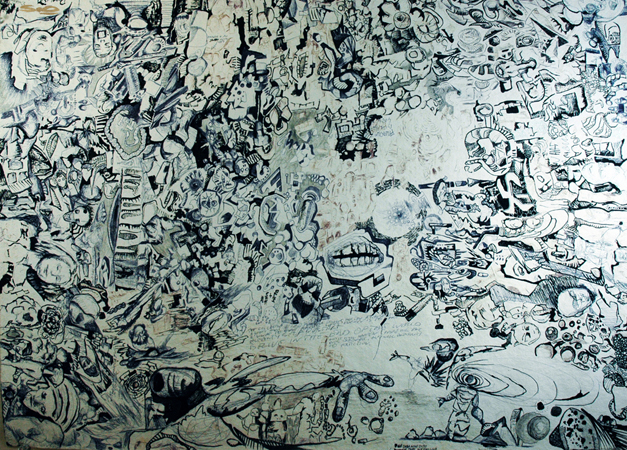 Dodalism (Doo-da-lism, root word: doodle): to do, express, create, play, learn, and explore consciously and with a sense of wonder, from one’s essence / spirit. It is a creative approach akin to playing, using scribbling or a seemingly chaotic approach to expression. Inspiration emerges from the moment at hand and responds to awareness of the internal and external environment, which gives the work a poetic quality.

Taking account of Zen teachings such as “no mind” and other creative approaches like stream of consciousness and free forming, Dodalism is a body of work about channeling creativity into a physical manifestation by focusing on the action of “doing.” The idea shapes itself organically, with each action influencing the next action.

Initially I conceived of Dodalism as a purely abstract aspect of creating. The Infernal Machine drawing, one of my early pen scribbles, was used as a way of mapping and recoding thought. I was curious to see what kind of patterns, if any, would emerge from the attempt of separating my ego from the creative output? The non-specific approach created a space where ideas came and went, producing a rich mosaic of miscellaneous possibilities.

With each new piece, Dodalism progressed to encompass representational elements as the works became narratives and recordings of impressions that gathered during my moment of creating. Perceptions were noted and fed back into the creative loop, in turn influencing further action. I came to focus or channel the “chaotic scribble” within conceptual boundaries, thereby preserving the liveliness of the original scribble drawing while refining the presentation of its underlying ideas.

I have applied this creative approach to drawing, painting, installation, performance, writing, and research, fulfilling the original goal of Dodalism — to tap into and maintain a creative flow.